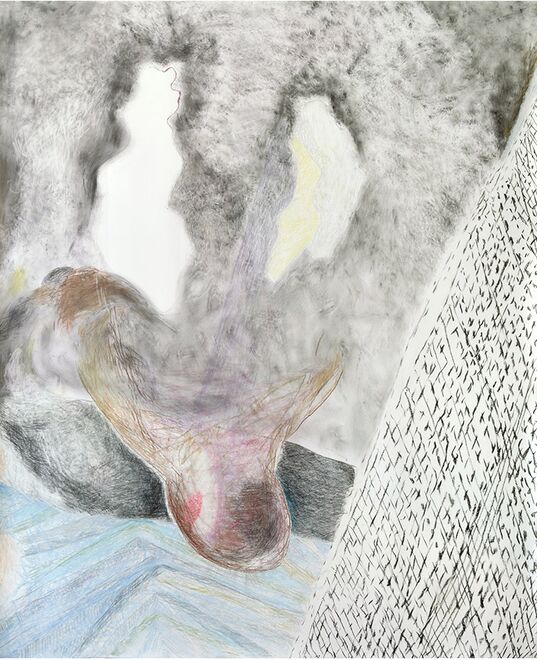 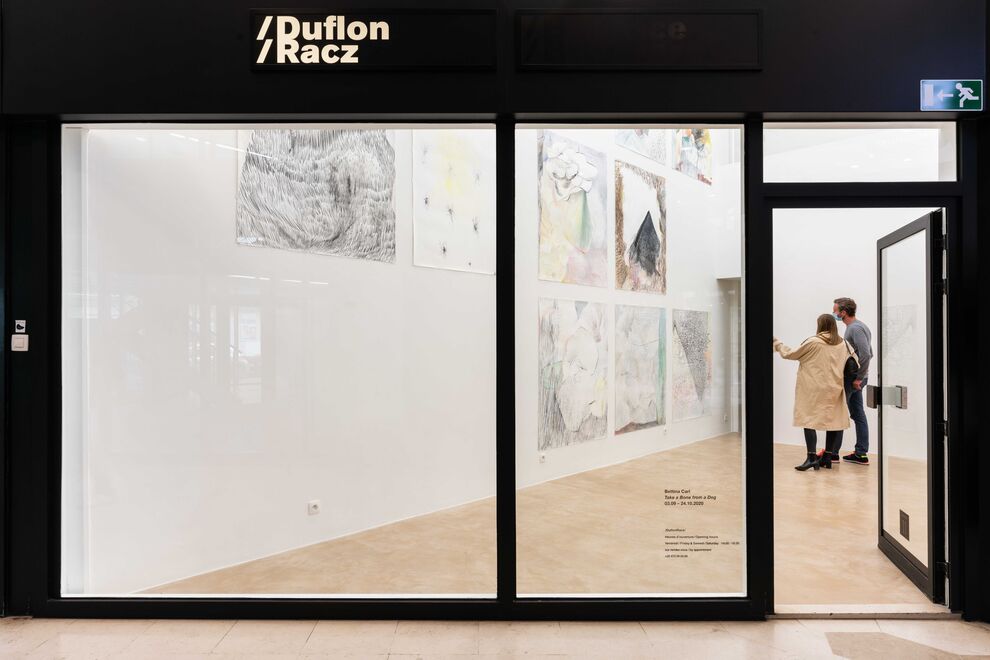 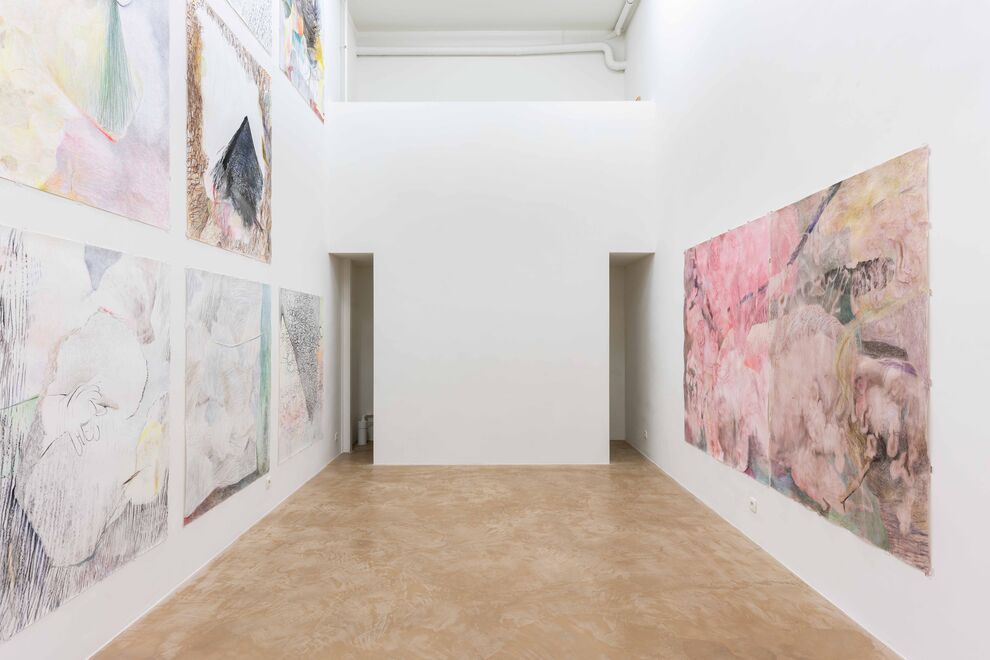 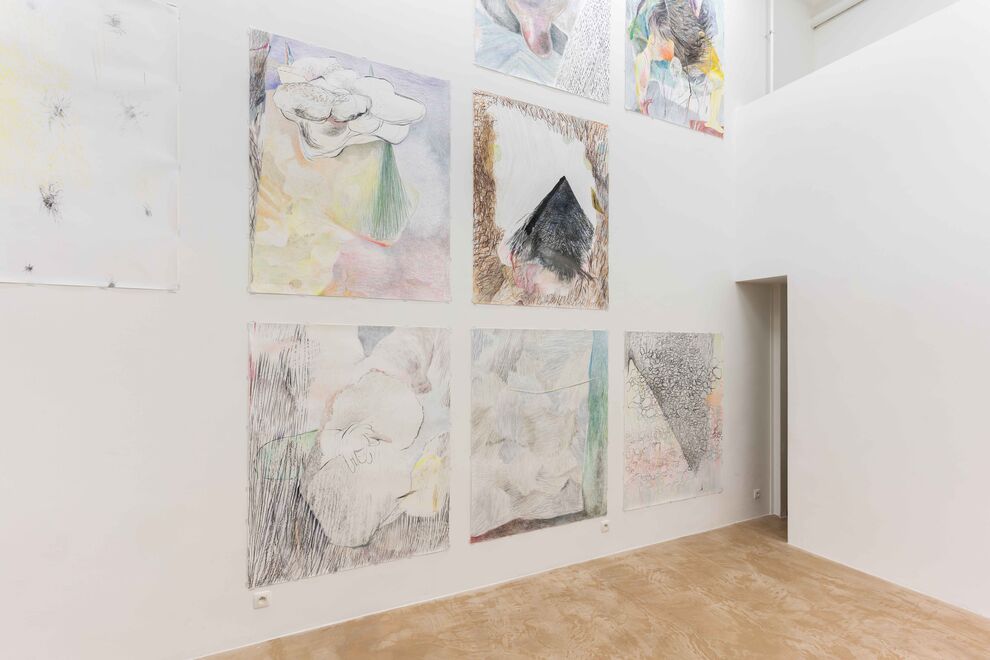 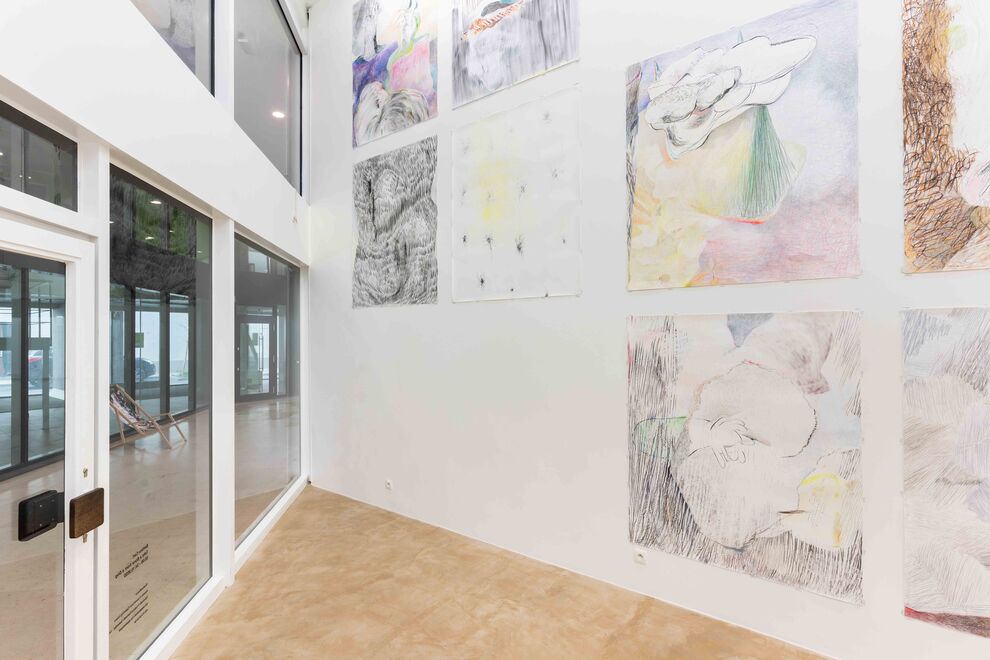 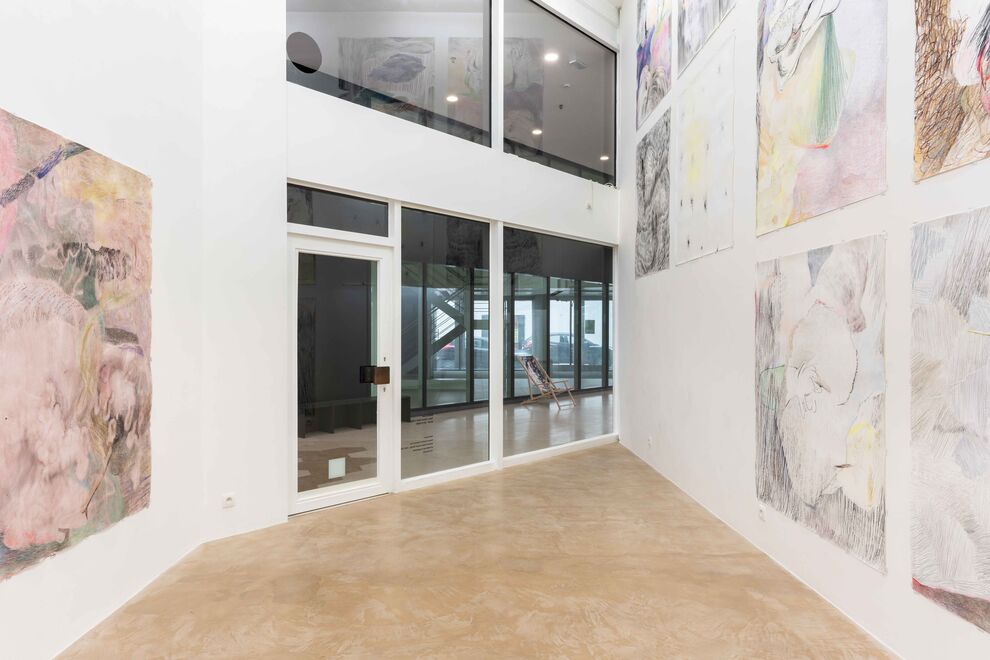 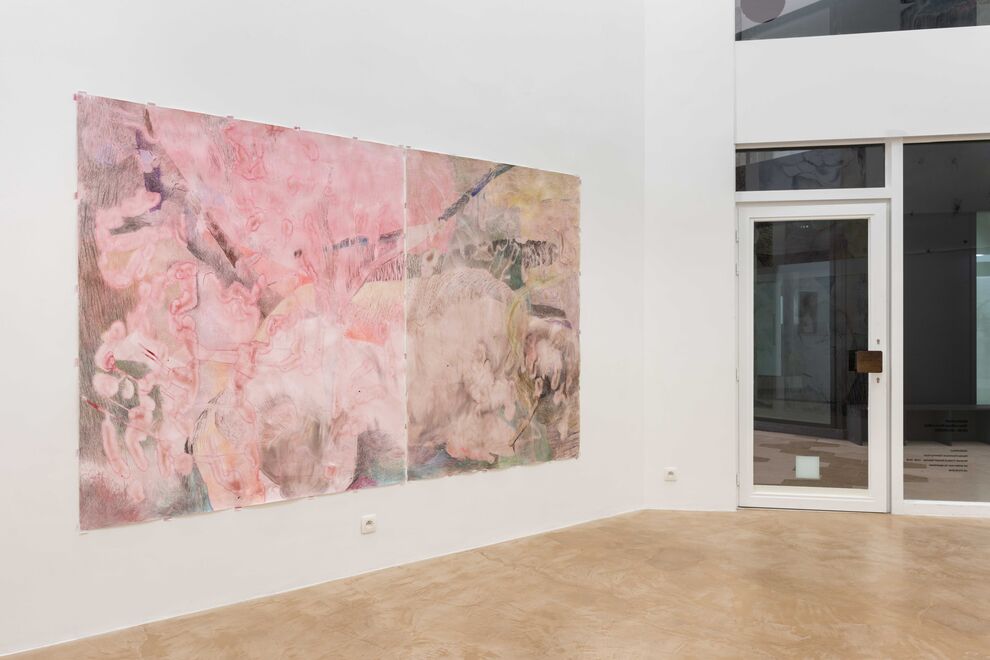 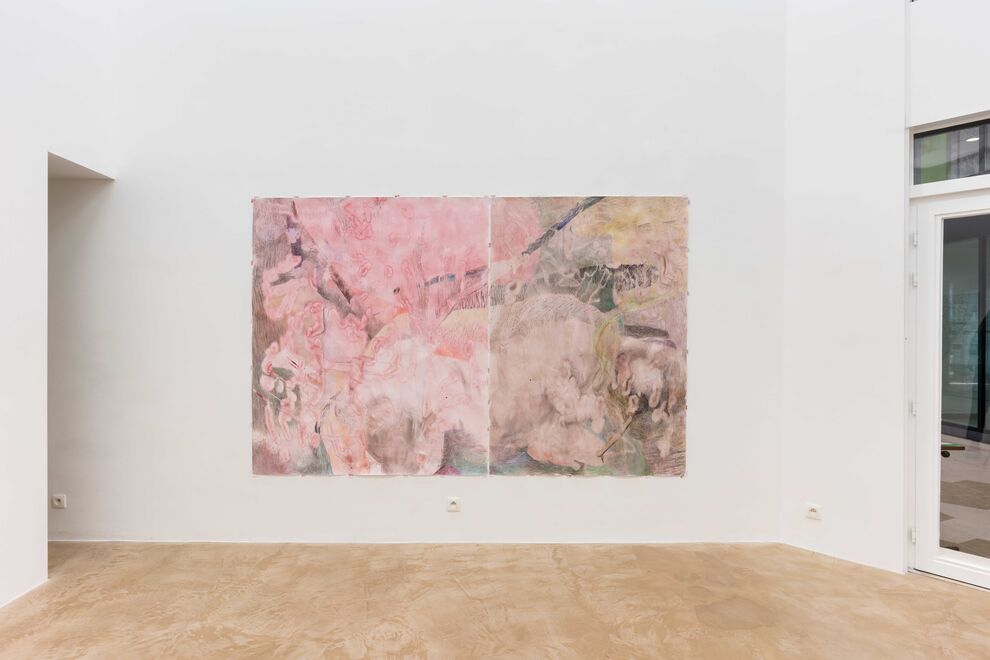 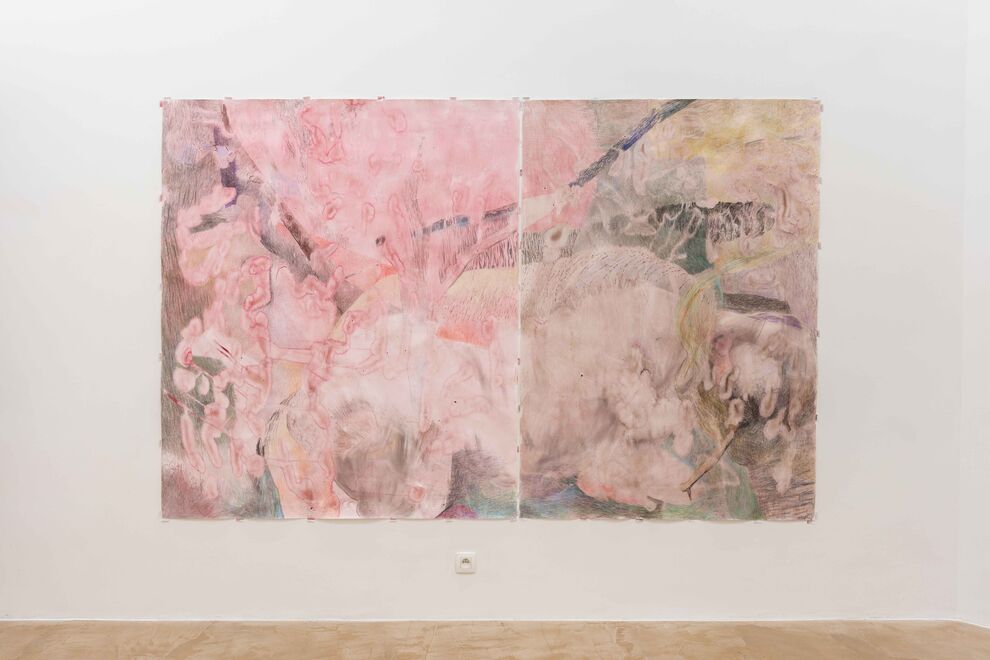 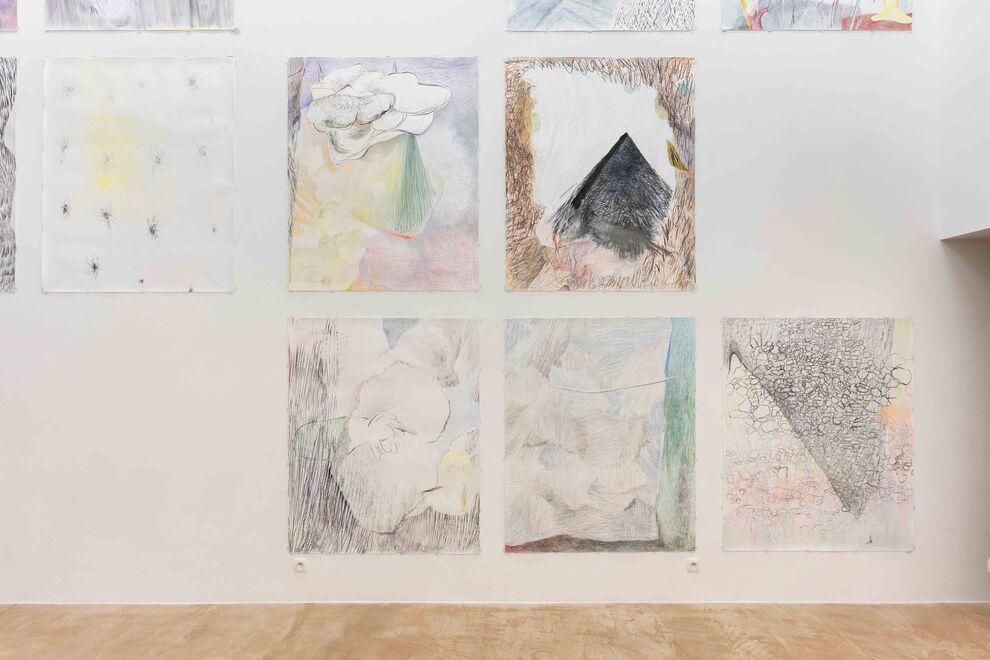 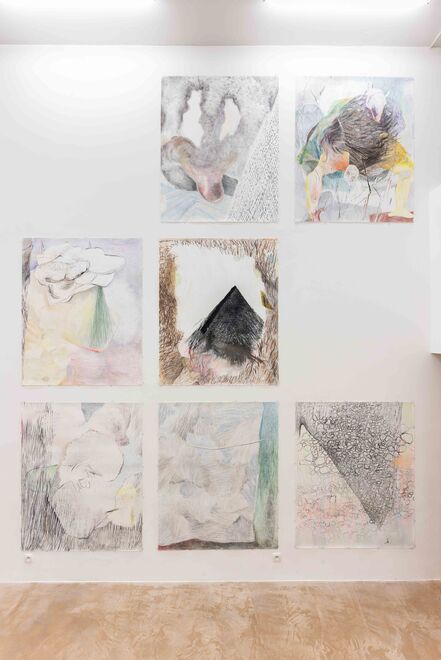 Following several solo- and group exhibitions with work by Bettina Carl at DuflonRacz Bern, we are proud to present the artist’s first solo show at our gallery in Brussels. “Take a Bone from a Dog” brings together 12 large-format drawings in a wall-filling arrangement conceived by the artist especially for the space at the Rivoli.

Bettina Carl’s artistic practice focuses on drawing. While her multi-layered compositions evade a narrative approach, often verging on abstraction, her work remains figurative. For the past couple of years, corporeality has been the predominant issue of her work, more precisely the unresolved, and often rather silly relations we are doomed to maintain to our physical selves.

Most of the works in the show are part of the artist's recent series “Einsilbige Tiere”. In German, einsilbig is an ambiguous term, thus the English title is "Taciturn or Monosyllabic Animals". Here, the “beastly” appears as a wildcard for all kinds of uncontrollabilites, whether they seem desirable, or rather threatening.

“(…) Abstracted bodies, anamorphically distorted skulls, textures of fur and skin: these are beings in a state of metamorphosis, the transfiguration of man and animal, in a state of in-between. Often, the portrait-format sheets include a drawn ‘frame’ that on the one hand stabilizes the image, on the other hand acts as a kind of curtain that has been pulled aside for the Being – and also the picture – to appear. (…) The colourful, sometimes “light-handed” drawings can be read as commentaries: on concepts of the body and the emotionality of physicality, on ideas of the animal as something uncontrollable that eludes rational access. Bettina Carl pursues these themes with great consistency. Moreover, her interest in ever new approaches and perspectives is impressive, turning each group of works into a concise, individual investigation of content and means of expression.” (excerpt from a text by art historian Irene Müller, published in Kunstbulletin, October 2020).

Biography
Bettina Carl, born 1968 in Bavaria, lives and works in Zurich. She studied English and Spanish Literatures at the Universities of Munich, Granada, and Berlin, and Fine Art at the Berlin University of Arts, Chelsea College of Art London, and at the Critical Studies Postgraduate Course, Malmo Academy, Sweden.

Among her recent shows are solo and group exhibitions at DuflonRacz Bern, Kunsthaus Grenchen, MARCO Museum of Contemporary Art Buenos Aires, Haus am Luetzowplatz Berlin, Helmhaus Zurich, and the D.U.M. Museum for Contemporary Art Brno, CZ. Bettina Carl won several residencies and awards in Berlin and Zurich, and she is also active as a curator and writer in the art field.