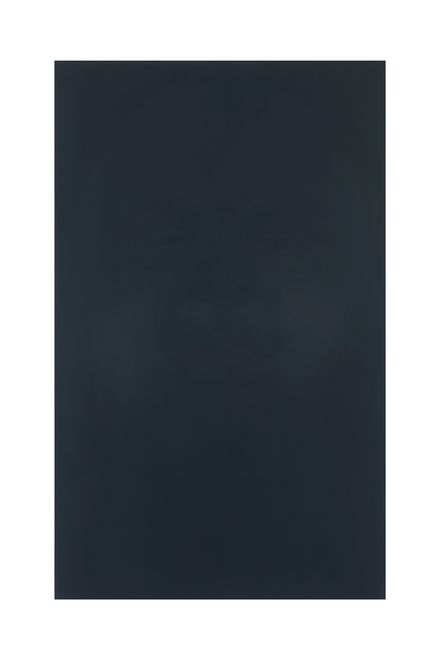 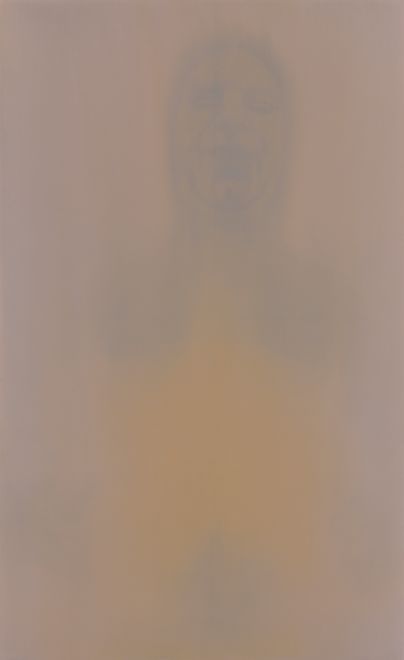 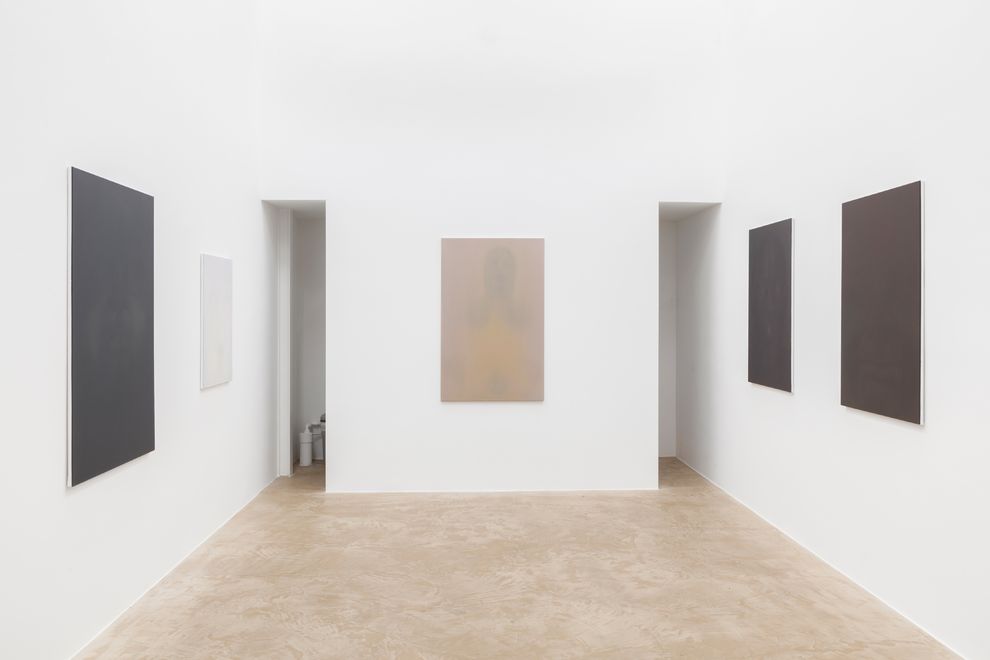 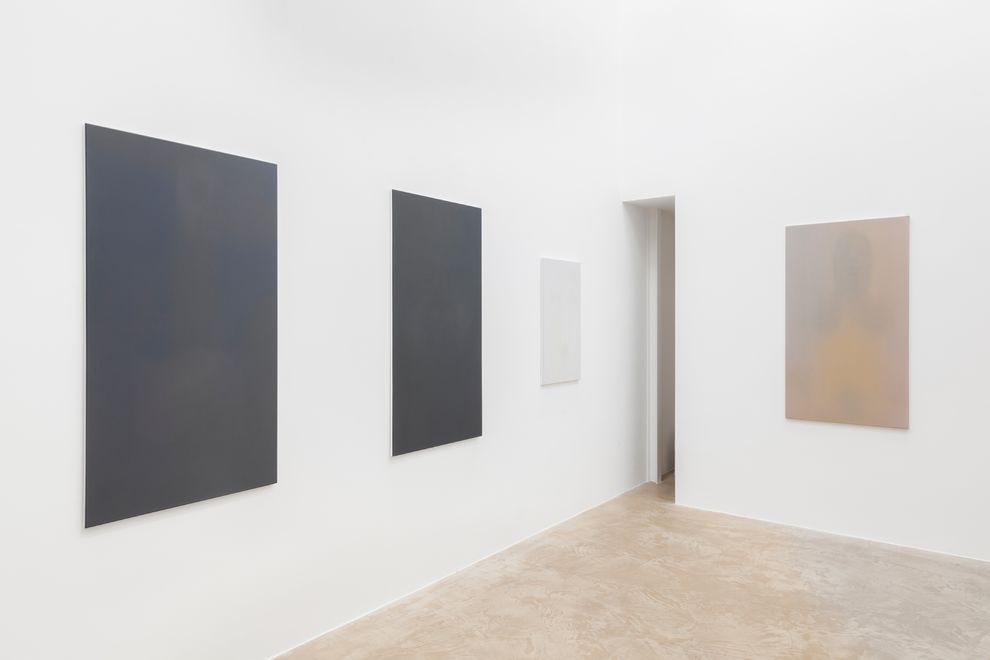 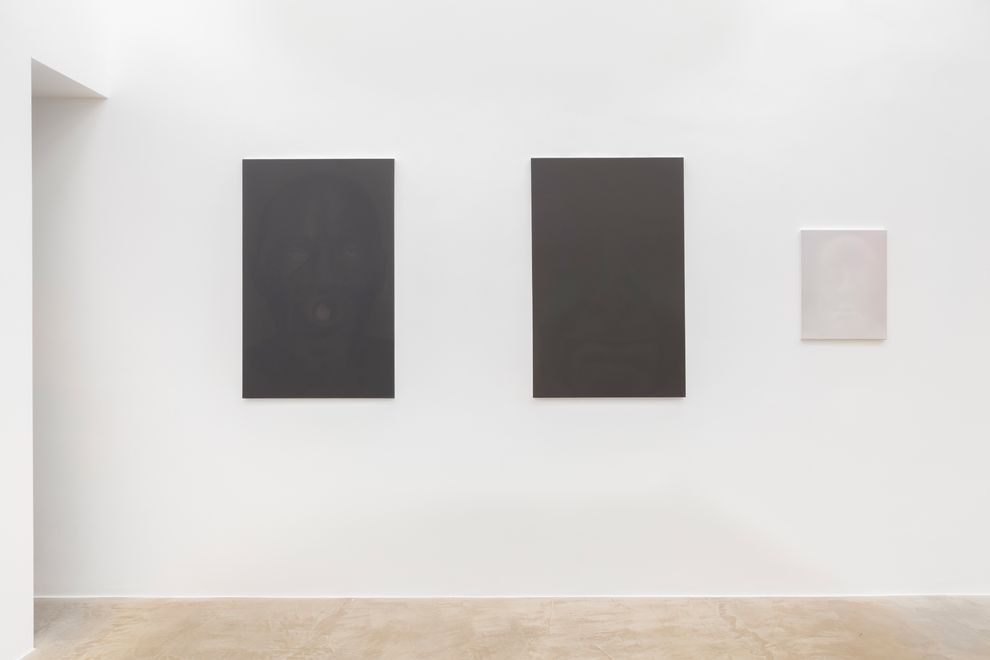 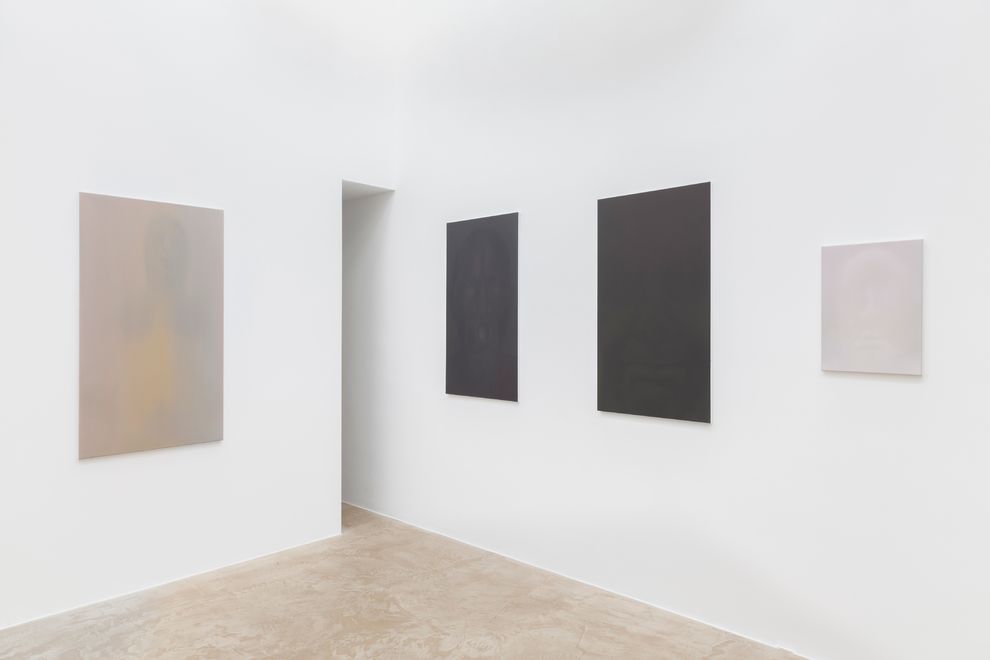 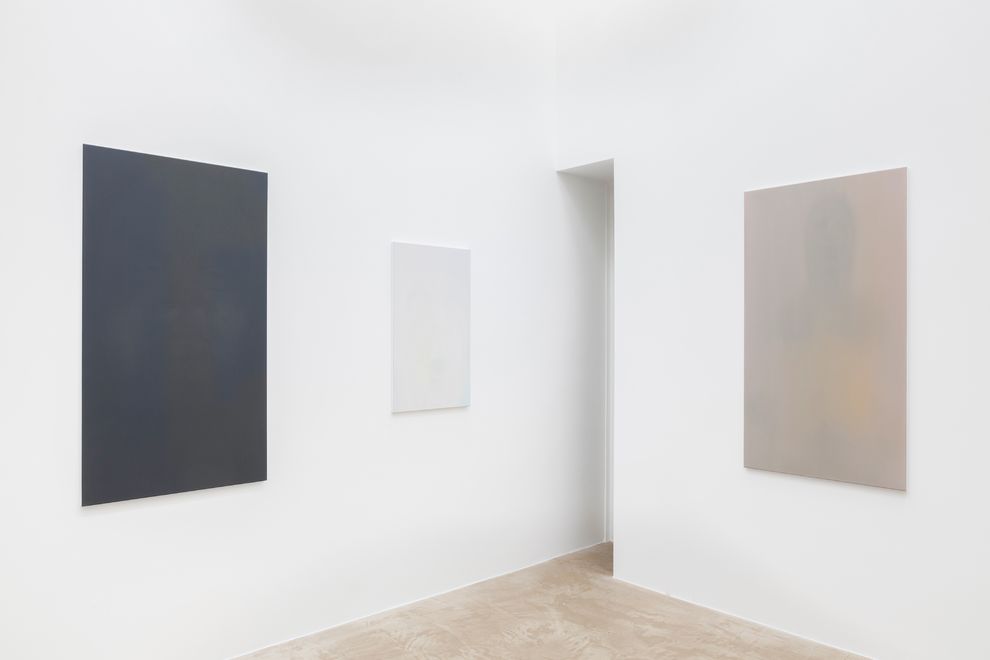 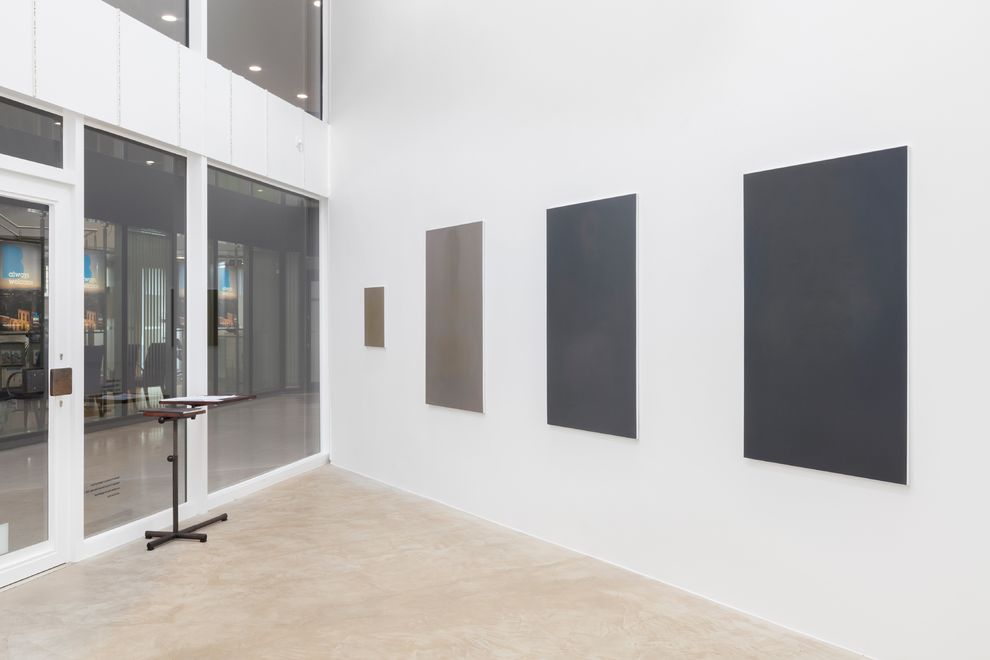 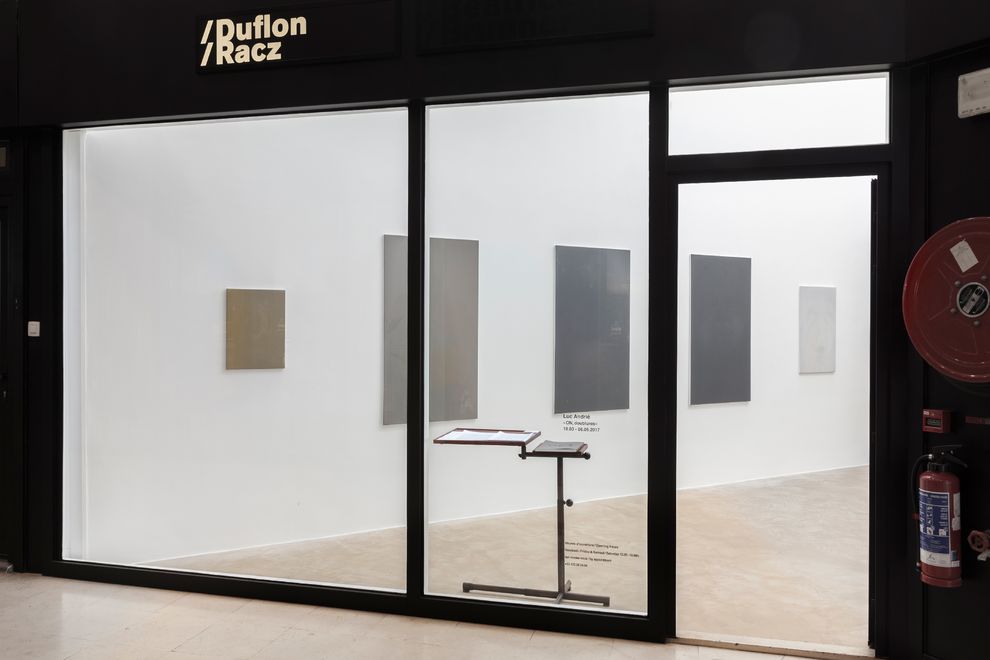 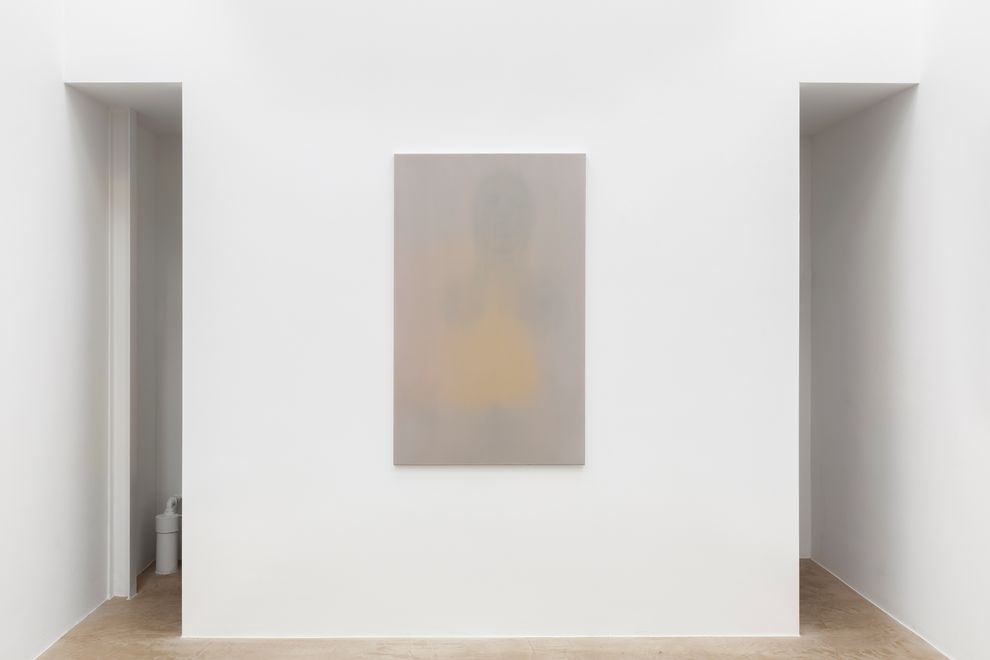 Luc Andrié: «It is me, me playing a role, me as an actor. In deciding to paint myself, I am seeking a radical autonomy in my subject: It is me, but it is the utmost of me, as many contradictions and paradoxes as possible: an anonymous self, how Luc as a god created Luc And & rié – all those pastor’s sons! ... I use my body as a medium, as in performance art, a body that exposes itself to its feelings and to the reality of the world, to our reality. It is a body that I know, that I experience all the transactions of my life with and through. It is still me the artist and his self, with that accumulation of visions, thoughts, and feelings that explode within him. I say that I paint a we. My painting shows a contemporary, anonymous man, in a world that is both porous (poreux) and fearful (peureux), introducing himself in front of other anonymous people, interrogating them, but without them knowing just what question these pictures are asking.»

(Excerpt from an unpublished interview with Kathleen Bühler, curator of contemporary art at Kunstmuseum Bern)

We might reply to the son of Andrié that actually it is not just one question that is being asked, but a plurality of questions that we are being invited to work out.

In this sense, we can point out that it is not only a contemporary anonymous man that is being shown, but a man who is already mature – certainly no longer a young man – masculine, white, a dirty white. This is not a question of following contemporary debates by emphasizing the color of his skin, but of taking this body the artist is speaking about seriously, « (...) a body that exposes itself to its feelings and to the reality of the world, to our reality. It is a body that I know, that I experience all the transactions of my life with and through.» So it is also the child’s body, then the adolescent’s, he talks about and paints, a body hit in the solar plexus by the colonialist and fascist régime in Mozambique during the apartheid period.

Following on from this, we might think that the white men in briefs on show, grimacing or miming the arrogant expressions of potentates, convey something of the men pathologically obsessed with power that the artist may have encountered over the years – in earlier days in a Western-style supermarket in the capital Maputo or facing a court, then in prison at Nyon on the shores of Lake Geneva as conscientious objectors, or tomorrow in a museum or an exclusive restaurant.

Luc Andrié paints his body in the most fluid manner. Paint that lacks body. More like the layers of mist one might see shrouding the lower slopes of the northern Jura Mountains. These man’s bodies and heads evaporate, dissolve, and are absorbed into the monochrome background. The figures in Luc Andrié's paintings in fact stand out so little from the background that from a distance we perceive only a monochrome canvas.

In a certain context, these monochrome surfaces, painted recently in sometimes very off-putting, even scatological colors, can exploit being part of the most radical painting of Western modernity, the painting that announced its own demise. This was very obvious in his exhibition at the «Circuit» art space in Lausanne in 2013, as a result of the way it was hung. Knowing that institution's liking for geometric abstraction, and in view of the low-level lighting and the large distances between the groups of six or seven canvases, the exhibition could be seen as a variation on the work of say Alan Charlton – or Frédéric Matys Thursz, Traugott Spiess, or indeed Jef Verheyen, who is closest to Andrié in terms of the almost transparent application of multiple layers of color.

These monochrome surfaces, never appealing, [not schmaltzy as in earlier series], are in a way the place Andrié's painting started out from.  As a young artist, he had been close to the heroic, post-painterly painting celebrated in post-war America, with its promise of reasserting the primacy of painting over the other arts. Painting that was sufficient unto itself, and was ultimately dismantled into its constituent elements by the artists themselves. Jeff Wall observed that the radical painting of the 1970s, analytical monochrome, had completely banished the human figure, which appeared for a final time in Barnett Newman's work in the form of a zip. As a result, Wall reintroduced the human figure through the medium of photography. Luc Andrié makes it float on and under the monochrome through the medium of painti

On a conceptual level, it could be said that in this case the monochrome acts as a matrix in which the figure is inscribed. But is it really a process of inscription? Or on the contrary, does the figure arise from these indigestible «sauces», these unlikeable colors (to use a term dear to Christian Bernard when talking about this body of work, which he has exhibited repeatedly)? Does the figure fade in Luc Andrié's painting, or does it emerge into the light? As the artist latches on to this man without qualities who wants to fart higher than his ass, he makes his message more complex. The canvases become ever more ambiguous.

And we, the spectators, are reeling. We shift our bodies according to the light that falls on the canvas. We move our bodies to get to grips with this figure, this portrait that escapes us. By taking a step sideways we attempt to conjure up an image (of a body, a face), without ever really being able to take in the whole. Some part of our short-term memory provides what is missing in the construction of that whole.

Luc Andrié's commitment is comparable to that of Samuel Beckett, who responded to the question «Why do you write?» with «Bon qu’à ça» – All I’m good for. All he is good for, and reluctantly. Anyone wishing to see a Christian connotation in this reluctance will remember that all resistance entails grappling with the subject. In the case of Luc Andrié, this argument is easy to make since he is the son of a pastor – not only that, but a pastor involved in the anti-apartheid movement.

What is articulated in the artist's practice of constantly painting himself as an Other is certainly one of the most powerful responses to the question of identity in the field of contemporary visual and socio-political art. We do not have a single identity, we are inhabited by several, and we constantly construct new ones: I becomes «We».